Goals: The goal of NASA's Apollo program was to land humans on the Moon and bring them safely back to Earth. Six of the missions achieved this goal.

ALSEP was a collection of geophysical instruments designed to continue to monitor the environment of each Apollo landing site for a period of at least a year after the astronauts had departed. Designed for a life of one year (Apollo 17 was designed for two), they ended up working for up to 8 years, the experiments permanently shut down by Mission Control on 30 September 1977.

Due to the experimental nature of the first landing of Apollo 11, especially the mechanics of getting to the lunar surface and back, science took a lesser role, so Apollo 11 had a simpler version known as the Early Apollo Surface Experiments Package (EASEP), with only two experiments.

Accomplishments: The Apollo program provided a unique opportunity to establish a series of powerful scientific outposts on the Moon that could be remotely operated from Earth. Even today, much of what we understand about the Moon's interior comes originally from the ALSEPs. Their measurements of the solar wind and radiation at the moon's surface improved our understanding of the space environment and helped to pave the way for future exploration by humans. The five ALSEP stations were finally shut down in 1977. Project Apollo's goals went beyond landing Americans on the moon and returning them safely to Earth. They included: 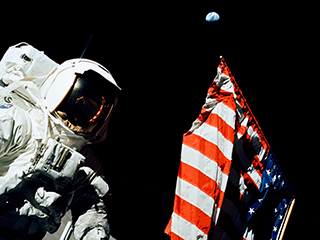 Everything you need to know about Earth's cosmic companion.

Go to the Moon