Goals: Galileo was designed to make the first study of Jupiter and its moons and magnetosphere from orbit. The orbiter carried 10 science instruments and an atmospheric probe.

Accomplishments: Like the famed astronomer for whom it was named, the Galileo spacecraft logged quite a few firsts during its 14-year mission to Jupiter.

Among its discoveries: the first satellite (Dactyl) circling an asteroid, an intense radiation belt above Jupiter's cloud tops, extensive and rapid resurfacing of the moon Io because of volcanism, and evidence for liquid water oceans under the moon Europa's icy surface. As a result of Galileo's mission, Europa has become one of the most tempting places to look for conditions that might be favorable for simple forms of life.

The orbiter carried a small probe that became the first to sample the atmosphere of a gas planet. The probe parachuted into Jupiter and returned data for about an hour before succumbing to heat and pressure in the atmosphere. During its brief mission, the probe measured temperature, pressure, chemical composition, cloud characteristics, sunlight, heat energy coming from within the planet, and lightning. The probe's measurements showed that Jupiter's atmosphere has more heavy elements than the sun by a factor of three, suggesting that that the conventional understanding of Jupiter's formation, and thus conditions in the early solar system, needed to be revised. 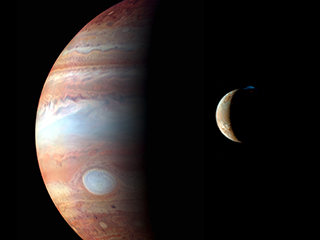 Only the Sun has had more influence on the formation of our solar system.